Monthly archives for May, 2017 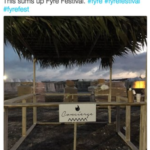 By Allison Barry By now you have probably heard about the 1,000s of millennials that were duped by popular 2000s rapper, Ja Rule, into paying between $1,000 to $100,000 to be stranded on a tropical island with a staff woefully underprepared to host a “festival.” If you somehow managed to avoid the social media firestorm – pun intended – you can catch up on all the drama here. In hindsight, the potential pitfalls and red flags indicating an impending disaster are pretty evident. As PR … END_OF_DOCUMENT_TOKEN_TO_BE_REPLACED